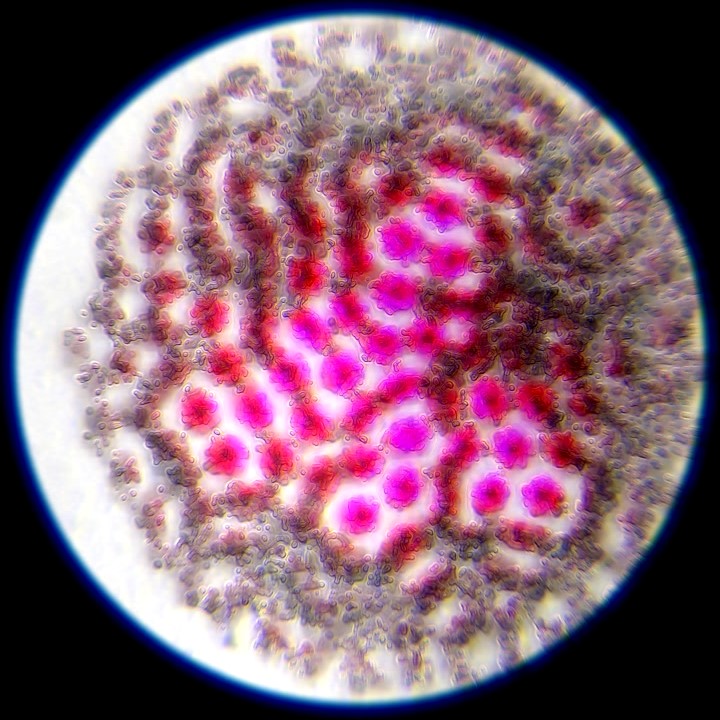 “In Figuro” is a short movie about the virtual study of an intriguing kind of form of life. Some virtual tools, such as an optical microscope, a temperature regulator, an electrical current inductor, are used to explore the growth of a mathematical and algorithmic particle-based system. The simulation runs in real time, and the movie is the raw footage of a live record of the simulation, without any post-processing edits. This particle system is quite simple, yet it demonstrates some similarities with behaviors we can observe in the real world. These are only similarities, because this system does not exhibit all the rules required for a system from which life can emerge. Its study still remains interesting and shows how from simple rules can quite complexe and natural-looking patterns emerge.

For a long time, maybe since the rise of consciousness, we have wondered about the origins of life. Even though we have built a vast realm of knowledge, we are still unsure about how life and consciousness emerged from the soupe of particles there was on earth. We have some theories, and some of them seem to correlate with what we deduced from observation and analysis. Once in a while, a new theory is formulated and it fills a gap in our understanding, but we will probably never be able to wipe every uncertainty about our theories because we don’t have access to the data we need, as erosion of the time made sure only infinitely small traces of what happened at the origins remain today.

We are limited by the data we have access to and the tools we developed, so what if we could find the answers we are looking for through the creation of virtual environments in which the rules we design can create systems which exhibit signs of life ? Theoretically, if we were able to replicate the exact same conditions we had on earth at the origins, and run a very precise simulation in a virtual environment, we should be able to replicate life. But such a thing is currently impossible because we don’t and we will probably never have access to enough computational power. However, every year, because of the advances in technology and the work done in research, our computational models of artificial life systems are getting more complexe, more and more encouraging results are found. If we cannot replicate the exact same conditions, maybe we can find some simplifications and still get results. This is a field of research in computer science called “artificial life”.

By using virtual tools plausible in the analysis of real world matter, even though their usage might not be meaningful to the scientific study of such algorithmic systems, “In Figuro” tries to show to the spectator that, maybe, some mysteries about life could be discovered through the study of artificial life.

This project is the result of experimentations trying to achieve an optical microscope realistic look in real time. This is also the result of a research in the usage of virtual tools to interact with my simulations. The evolution of this project was documented on different posts on Reddit (iteration 1, iteration 2, iteration 3). This is the first project in which I’m generating the audio, it’s nice to try new stuff out and I wanted the audio to take an important part as another layer of feedback to the whole system. I worked a lot on the feedback interface as well, I wanted each part of the whole system to be connected in the most elegant way I could think of.

By working so much on the simulation, the rendering, the virtual tools, the generative audio, and connecting all these parts together, I thought it could be interesting to create a much more robust piece that I usually do, and try a new format, a short movie.